All of my wildlife photography prints for sale here are available as wall art, and I can even print onto metal, canvas, posters, or wall-clings for a truly unique piece. 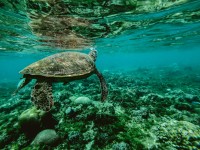 Without question, one the most popular marine creatures is the turtle. Green, hawksbill, loggerhead, leatherback\u2014we love every one. And best of all, they can be found and photographed in almost every destination.

Elephants are the largest land animals on Earth, and they're one of the most unique-looking animals, too. With their characteristic long noses, or trunks large, floppy ears and wide, thick legs, there is no other animal with a similar physique. Our Elephant Image will make the perfect gift for any occasions. Great Addition to any home and office.

A Tiger is a powerful carnivore, a hunter with sharp teeth, strong jaws, and a very agile body. They are the largest naturally occurring species of cat, of which the Siberian tiger is the largest, weighing up to 800 pounds and measuring up to 11 feet head to tail.

While penguins can’t fly, their stiff flippers, webbed feet, and sleek shape make them expert swimmers. In fact, they spend most of their lives in the ocean and do nearly all of their hunting for krill, squid, and crabs underwater. They can swim about 15 miles an hour, and when they want to go faster, they often porpoise, or leap out of the water as they swim.

By far the most common and widespread species of fox is the red fox (Vulpes vulpes) with about 47 recognized subspecies. The global distribution of foxes, together with their widespread reputation for cunning, has contributed to their prominence in popular culture and folklore in many societies around the world.

Peacocks are large, colorful pheasants (typically blue and green) known for their iridescent tails. These tail feathers, or coverts, spread out in a distinctive train that is more than 60 percent of the bird's total body length and boast colorful "eye" markings of blue, gold, red, and other hues.

Home for polar bears is on the sea ice, where they hunt seals at open leads. Polar bears are found in five nations across the Arctic.

The sun bear is one of the smallest bears, at around 1.4 meters (4.5 ft long) and weighing up to 100 lbs. They have short, sleek black fur with an orange-yellow horseshoe shape of color on their chest.